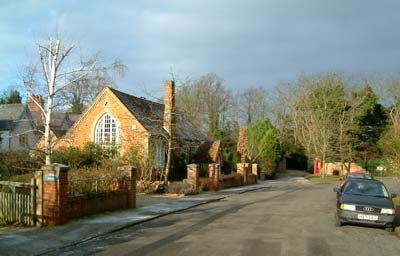 Broughton has never been a big village. It was described in the Domesday Book as having two manors and these were not combined under one owner until the sixteenth century. The larger manor was granted to Walter Giffard by William the Conqueror, and by 1151 this manor was held by a family which took its name from the village, the de Broughtons. In the mid-fourteenth century the manor passed to the Aylesbury family who also held neighbouring Milton Keynes, and they in turn passed it on to their relatives, the Staffords. Humphrey Stafford sold Broughton in 1573 to Thomas Duncombe, second son of William Duncombe of Great Brickhill, who had purchased the lands of the other manor the previous year. The Duncombes and their relatives continued to own the combined estate until 1748, when it was purchased by Barnaby Backwell, a banker, of London and Tyringham. By 1778, the male line had failed and a Backwell sister, who was married to William Praed of Cornwall, succeeded. Later generations adopted the na

me of Backwell Praed. (The Praed family is known for its association with Praed Street in London and the early development of the Grand Junction Canal.)In 1859, a later William Backwell Praed decided that he wanted to re-adopt the name of Tyringham, and he obtained a royal licence to do so. The last of this generation of Tyringhams, Roger William Giffard Tyringham, was responsible for replacing much of the village housing, and his initials (with the date) can be seen on many of the houses. 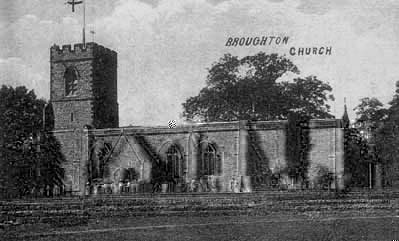 The church of St. Lawrence which stands just off the main road is not particularly distinguished in appearance although typical of the decorated period of architecture.This picture from the early twentieth century shows Broughton villagers dressed in their Sunday best attending the morning service. However, the jewels in Broughton’s crown are to be found inside – see our description in 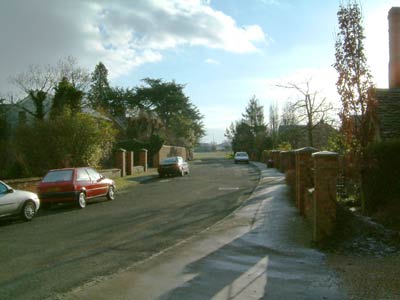 The village street at Broughton has always been an important part of the link from the Midlands of England to London. This was particularly so when plague struck Fenny Stratford on the Watling Street. The road was turnpiked in 1728 becoming the main road from Northampton to London and it became progressively busier until it was bypassed in the 1960s. It seems strange that there should be no surviving inn at Broughton, given the importance of the road. In the early nineteenth century two of the farms had inns attached – White Horse Farm and Kings Head Farm. The latter is shown on a map of 1825 as being south of the church on the west side of the road, but by 1881 the farmhouse had been pulled down and a new building erected to the south of the village on the site of some earlier outbuildings. This property is now known as Manor Farm. White Horse Farm was on the east side of the road, and by time of the estate survey of 1837 its lands had been absorbed into Kings Head Farm. Some of its buildings may be incorporated in Toll Cottage. An earlier inn was mentioned in the 1672 will of Thomas Duncombe – the Red Lion. It seems that the temperance movement was strong at Broughton at the end of the nineteenth century and concerts given by the Broughton Band of Hope are reported in the parish magazine. At one of these, Daisy Watson was said to have recited “Jack and his hard lump”! 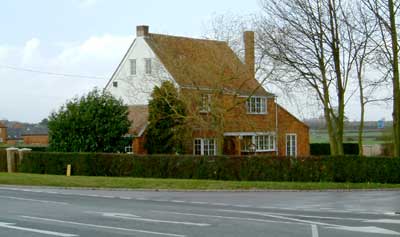 Toll Cottage at the junction of the main road and the lane to Broughton Grounds (now on the far side of the M 1 motorway) probably incorporates the remains of White Horse Farm. A previous owner found evidence of foundations closer to the road than the present house. The actual Toll House stood at the junction of the road to Milton Keynes and the main road in the angle between the two roads so that thetollkeeper could control both approaches. With White Horse Farm just south of the gate with stabling for 20 horses and Kings Head Farm just north of the gate with stabling for 60 horses, Broughton served much the same purpose as the NewportPagnell service area on theM1 today. The continued importance of the area as a route to the north is emphasised by the fact that it is possible to see a blue sign on theM1 between the trees to the right of the house. 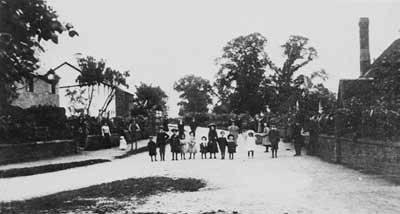 The children pictured spread out across the road in about 1900 were, however, unconcerned about the traffic – much changed in sixty years! The building on the right was the village school which was built in 1864 by William Backwell Tyringham, bu

t had a comparatively short life as it was closed in 1907. Thereafter the children had to attend the school in nearby Milton Keynes. The building still stands today, privately owned. There was an earlier school behind the church which finished its days as a farm building. This was demolished in the 1980s.

The early school behind the church