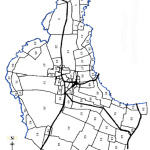 For most of recorded history both villages comprised land held by a single ‘Lord of the Manor’. Before the sixteenth century, the actual owner was the monarch of the day, and the Lord of the Manor held the land on behalf of the monarch (and paid dues). Later, the Lords could be said to own the land forming an estate. The only other landowner was the Rector, and he was appointed by the Lord who had the advowson. The effect of this was that the Lord of the Manor had absolute control of the village and the activities within it. Local historians often refer to this as a closed village. In such villages, businesses which did not directly serve the estate were discouraged as was nonconformism (not approved by the Rector). Both Milton Keynes and Broughton fell into this category, and thus the main activity in both villages was agriculture. In both cases, estate inventories including maps were prepared for the landowner at various times and these are reproduced here.